Each spring and summer, we see them…owned cats who are allowed to roam our city streets and parks. Doing so, is not only a violation of the Regina City Animal Bylaw, but also very dangerous for the cat.  A host of hazards loom for cats allowed to roam freely from their home.  Injury or death can often result from vehicles, toxins, disease, temperature extremes as well as threats from other animals including dogs, other cats and urban predators such as coyotes, foxes, owls and hawks.  Cheese’s story is an unfortunate example of one of these encounters before he arrived at the Shelter.

It was clear that the 5-year-old orange tabby had suffered numerous scratch and bite wounds around his head and neck. If you’ve ever heard two cats fighting, it’s not hard to imagine the damage that can be done to the combatants as each unleashes claws and devastating bites toward their opponent.  Cat saliva carries large amounts of bacteria, which, if deposited beneath the skin of another animal, can quickly cause painful and debilitating infections if not treated.  Similarly, bacteria is present under their claws from litterboxes that can have the same effects.

Often, these types of wounds seal over rapidly and trap bacteria inside the skin.  One of Cheese’s wounds had abscessed, causing significant pain.  Untreated, his wounds would lead to continued suffering and infection in other parts of his body.  Because of your support of the RHS, our veterinary team was there to provide immediate medical care to Cheese. His wounds were treated and antibiotics were administered to get him back in top condition. After a week-long recovery, Cheese’s time with us ended in the arms of his new mom in a very happy adoption photo-op! Nothing is cheddar than this!

While Cheese received the medical attention he needed, it was costly and his pain and suffering were avoidable.  When provided with places to climb and scratch and toys to satisfy their hunting instincts, domestic cats are not wild animals and are perfectly content to be indoors.  Should they want to venture outside, this should only be while on a harness and leash and supervised by their owner.  Another option is an outdoor “catio”, which can provide hours of safe time outside in the fresh air. When it comes to the health and safety of your cat, there truly is no place like home. 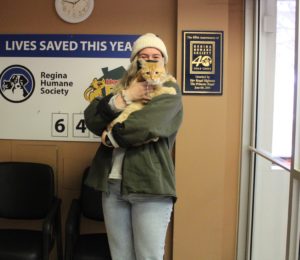