When he arrived on the first day of September, Legend was a sad-looking soul. His head and face were covered in scars and his nose was full of porcupine quills. He was missing part of one ear and had a painful abscessed tooth that had caused an open sore on the top of his snout. We were told that he had spent most of his seven years tied to a chain. His eyes showed the toll each day of those years had taken on him.

He was taken into the care of the RHS Veterinary team who removed the quills, tended to his wounds and extracted the tooth that was causing so much pain. He then moved to one of our foster homes to rest and to heal.

As the days passed, Legend began to reveal his true self – a happy-go-lucky pup who, in spite of what he had lived through, loved nothing more than a scratch on the chin and to be near people.

After over two months in our care, Legend was finally well enough to start looking for a new family.  He was a little older, could still see some complications from his wounds and it seemed that it was too much for some adopters.  Legend waited and waited for his hero to come to the Shelter.  Two weeks passed and he was still waiting.  The RHS featured him on all of its social media channels and local media visits, with one post being shared over 1,500 times and reaching over 97,000 people.  Our supporters and followers were called upon to share his story far and wide until it reached that one person or family who would look beyond his past and see Legend for who he truly was – a sweet soul who loved to be with people. Then, on what would have been Grey Cup Sunday, it finally happened.  That person came through our door alone and left with his new life-long pal.

We cannot thank you enough.  You came together and rallied behind this pup so he could realize a happy life that he so much deserves.

We never gave up on this boy and neither did you.  Thank you. 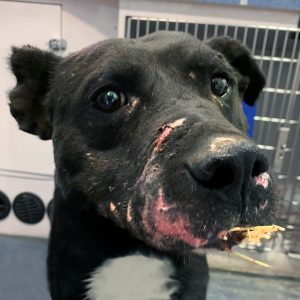 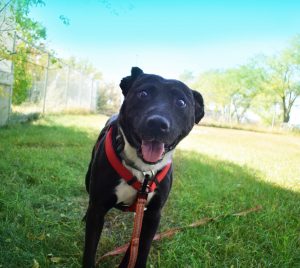 Legend after treatment and recovery 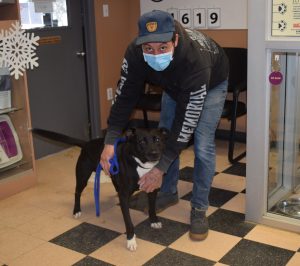