Late one night in August, Marbles and 78 other cats were seized from a hoarding situation by RHS Animal Protection Officers. Having suffered through living in such poor conditions, Marbles was extremely shy and shut down. He would hide in the back of his kennel and hiss at anyone who attempted to touch him.

Armed with patience, treats and the magic of chin scratches, the RHS Lifesaving Coordinator slowly discovered that under his tough exterior, Marbles was actually a big softie. After a few more days of gentle interaction, it was felt Marbles was ready to venture into foster care to continue building his trust.

His foster mom quickly won Marbles’ affection, proving him to be a very cuddly boy. But still, his fear continued to get the best of him, finding comfort hiding under the couch much of the time. After a couple weeks of little progress came the notion that adding some feline companionship might help bring Marbles out of his shell. 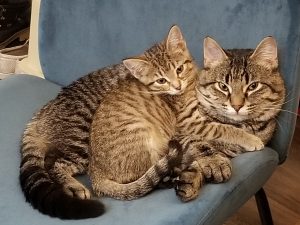 With the support of Krissy, Janet and Catarina, three four-week-old orphaned kittens who were also being fostered in the home, Marbles quickly learned that life beyond the underside of the couch was pretty grand. Soon he was spending his time playing and cuddling, and he would even run to his food dish at dinner time with his new-found friends! As days went by, he seemed to blossom into a much happier and content fellow – so much so that he was made available for adoption while still in foster, hoping that he would continue on his path of healing. 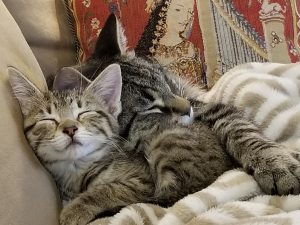 We are thrilled that his story ends in the best way possible! After two months of slowly learning what it feels like to be a well-loved house cat, Marbles found his new family. To ensure we all had tears of joy in both eyes, Marbles was adopted with his bonded pal Catarina, one of the three tiny orphans who helped save his soul. Marbles now gets to spend the holidays and the rest of his days chatting and snuggling with his best buddy.