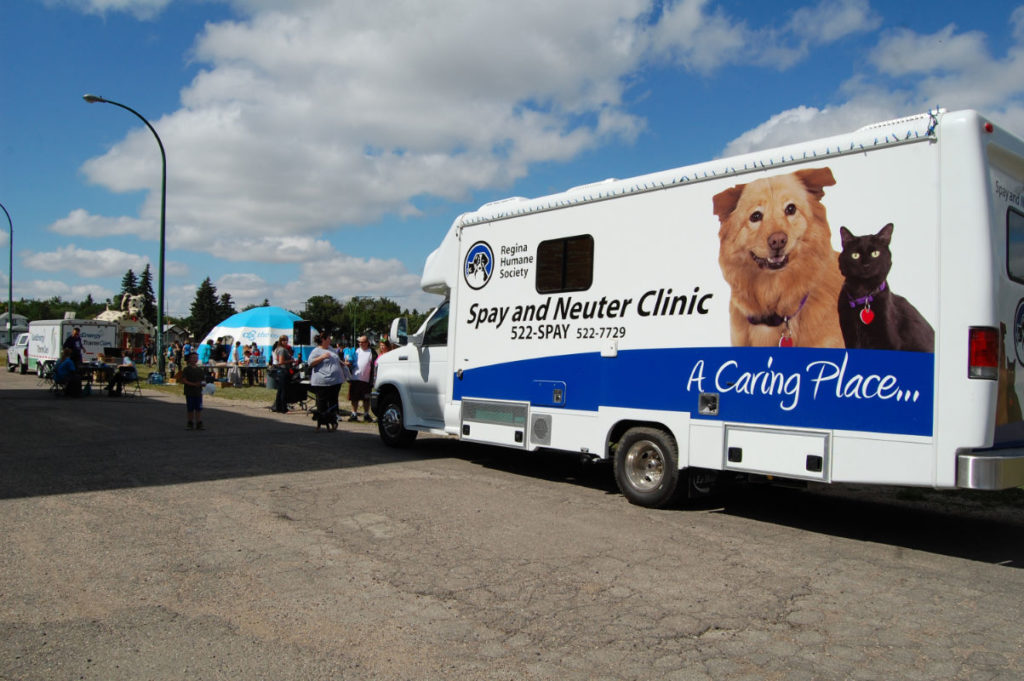 Simply put, homeless pets are everywhere.  In just about every community, there are homeless animals.  In our province, too many cats roam our city streets.  In rural areas, homeless dogs wander alongside their feline counterparts. In Regina, 500 more abandoned cats and kittens were brought to the Shelter in 2016 than were in 2015.  Many of these animals had endured starvation, numbing cold or blistering heat.  Others had been injured by vehicles, other animals, predators or even people.  The RHS uses many programs and initiatives to help save the lives of these unwanted souls and was able to find homes for most of them, but it is unfortunately not sustainable long-term. Another year such as last year could be devastating.

The single most effective solution to pet over-population is spaying or neutering your pet. By preventing unwanted litters of puppies and kittens, we spare these animals the suffering that many will endure as they try to live without a home and proper food and care and threatened by disease, the elements and other animals and even people.

While not the only solution to pet over-population, the spay and neutering of pets is the simplest and easiest way to treat the source of the problem, rather than the many ‘band-aid ‘ fixes that only treat the symptoms but do little towards long-term  remedy.

In spite of this, many still choose not to sterilize their pets and for a myriad of reasons.  Some, unfortunately, are fuelled by the many myths that float around the internet and other places.

Here are some truths behind some of the more wide-spread myths regarding sterilizing your pets:

MYTH: It’s better to have one litter before spaying a female pet.
FACT: There is much medical evidence that indicates just the opposite and that females spayed before their first heat are typically healthier. Many veterinarians now sterilize dogs and cats as young as eight weeks of age.

MYTH: My children should experience the miracle of birth so my pet should have a litter.
FACT: The miracle of birth is quickly forgotten when these litters become a burden when no homes can be found for them.  Often they experience unbearable suffering on the streets, abandoned in a field, are run over by vehicles, attacked by other animals or become ill due to lack of proper living conditions, food, and care. Teach children that all life is precious by spaying and neutering your pets.

MYTH: But I want to breed my pet.
FACT: There are many reputable breeders who breed their animals responsibly.  Most will already have homes for offspring before they are bred.  Sadly, far too many people simply become ‘backyard breeders” and contribute to the number of unwanted animals by breeding animals in hope of a quick profit. Even if you are “absolutely sure” that you will find homes for your pets offspring, you cannot control the decisions of others.  Your pet’s offspring or their offspring’s offspring could easily end up on the streets or in a shelter competing for a new home.

MYTH: I don’t want my male dog or cat to feel like less of a male.
FACT: Unfortunately, this is more about you than your dog. Dogs do not have any concept of sexuality or ego. Neutering your pet will not change his basic personality or give him some sort of identity crisis.

MYTH: Sterilized pets are lazy, eat more and will get fat.
FACT: The prime reasons that pets get fat is that they are over-fed by their owners and do not get enough exercise.  You can both stay trim and fit by regular walks and play, and watching what and how much your pet eats.  Your veterinarian can help with diet suggestions that may help too.

MYTH: A pet’s offspring will be just as cute, well-behaved and special as their parent.
FACT: There is no guarantee that your pet’s offspring will be anything like their parent with respect to behaviour and personality. This is especially true when the other parent is unknown due to an unplanned romp around the neighbourhood without supervision! There are many homeless pets in shelters that are just as sweet, smart and loving as your own.

MYTH: It’s expensive to have a pet spayed or neutered.
FACT: While there may be cost to having the surgery performed, it can be minimal compared to the potential of long-term costs incurred by a non-altered pet, impound fees and increased license fees.

The most important thing to know about spaying or neutering your pet is it saves lives. And that life saved may even be your own pet’s life. Sterilized pets generally see reduced rates of certain cancers (particularly of the reproductive systems), roam less and thus avoiding the dangers of the streets, are less prone to “marking” and spraying, and they tend to show less aggression and dominance behaviours.

Each pet adopted at the Regina Humane Society includes spay or neuter surgery so you never have to worry about additional costs or contributing to pet overpopulation.  Our Subsidized Spay/Neuter Program helps ensure that financial constraints are not a barrier for those families who want to be a part of the solution.