We don’t know how Leo came to be stranded on a Regina street with a badly broken leg one early winter morning.  On the surface, it would seem that his luck had run out. But that changed when he met a kind stranger who was walking to work.

The young puppy melted into the arms of his rescuer, who delivered him to the care and safety of the Regina Humane Society.

When examined by Shelter Veterinarians, it was clear that young Leo had suffered a severe injury to one of his rear legs, most likely the result of being struck by a vehicle.  The break was so grave that removing the damaged leg would be necessary to get our little patient up running and playing again as a young pup should be.

Leo’s surgery went without a hitch in the skilled hands of the RHS Veterinary staff and was then off for some well-deserved rest and recovery in one of our foster homes.

Leo’s luck continued to soar as his foster family had recently adopted Winston from the Society.  Last year, after being shot, Winston also suffered the loss of one of his legs.  The two became fast friends as Winston showed his little buddy that three legs don’t slow you down one bit!

It didn’t take long for Leo’s fun-loving character and love to be revealed with his constant smile and non-stop tail wagging. Once recovered and back at the Shelter, it was no surprise that little Leo spent only a few short days waiting for his new family to find him and whisk him away to a lifetime of love, happiness and warm snoozes.

If Leo could talk, we know he would say “Thank you” to all who helped to save him – the kind stranger who rescued him from the cold, the Shelter Veterinary staff for their skill and expertise, his foster family, and his doggie pal Winston for keeping him company while he healed.  But, his biggest thanks would be to you.  Because of your support of the Regina Humane Society, Leo received the critical care he needed and is living his best life now.

On behalf of Leo, thank you for caring and helping to make sure good news stories like his can continue to be told. 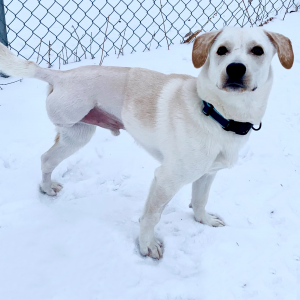 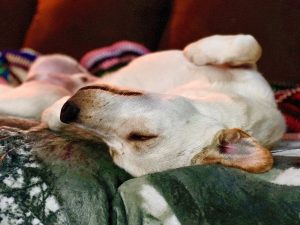