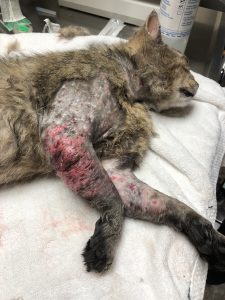 You have often heard that thanks to your support of the RHS, we can be there when an animal is in desperate need of help. This was certainly the case for Hercules.

When he arrived at the Shelter, battered, bruised and with fur missing from parts of his body, Hercules was immediately placed in the care of RHS veterinarians where his injuries, which were most serious around his face and front leg, were tended to. So severe was his leg wound, that the team feared amputation may be needed to save their small patient. Still, despite being in considerable pain, Hercules was affectionate and kind during his examination and as his wounds were cleaned and bandaged.  Afterwards, he was able to rest while shelter staff kept a close eye on his recovery. 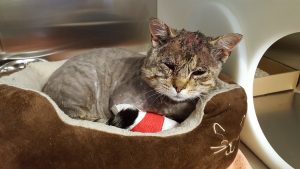 What happened next was miraculous to say the least. Not only had Hercules simply survived, but his healing power and determination was remarkable! His battered leg improved dramatically with each passing day, and with that, the fear of amputation soon diminished as well. In what seemed like the blink of an eye, Hercules no longer needed frequent vet care and was ready to carry out his recovery in the peace of a loving foster home. 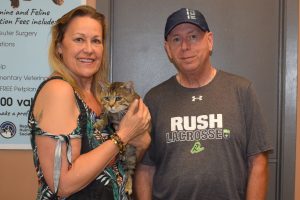 After a few weeks healing and regaining his strength, yet another surprise awaited him. When Hercules returned to the Shelter ready for adoption, he learned his adoption fee had been fully sponsored! The kind person who had rescued him had stayed in close contact with the RHS throughout his journey and wanted to help him find his permanent home as quickly as possible. The strength of kindness prevailed, and Hercules won his battle!