Shortly after being brought to the Shelter by RHS Animal Protection Officers in late June, Graham, a two-year-old tabby, began showing signs that something was not quite right.  He seemed to stare into space and “feel his way around” more than simply watching where he was going.  While he got around fine and played with toys like any other young cat, it appeared our fine feline friend was blind.

RHS Animal Care staff alerted the Shelter’s Veterinary Team and further investigation was done.  Graham was blind, likely due to retina detachment and glaucoma, which would cause quite a bit of discomfort for this cuddly boy.  Ultimately, bilateral eye enucleation, the surgical removal of both eyes, would relieve his pain and offer the best possible quality of life for their furry patient.

Graham’s surgery went extremely well and shortly afterward he was off to foster care to heal and prepare for the possibility of a new home.  We see many animals come through the shelter and their resilience is awe-inspiring.  The loss of eyes, a limb or tail usually slows them down little, and they continue to romp and play as if nothing had changed.  Graham was no exception.  His foster family reported that he loved to play and somehow always knew where the toy was.  He truly was a joy to watch and be with.

In time, Graham healed and it was his turn to find his forever home.  It was one of the Society’s social media posts about Graham that caught the attention of a very special family.  As it turns out, one of the children in the family, Deacan, is visually impaired.  When he heard Graham’s story, he knew this cat was the pet for him – his kindred spirit.  Within no time the two new buddies were on their way home, ready to take on the world of adventures that they will share – guiding each other every step of the way. 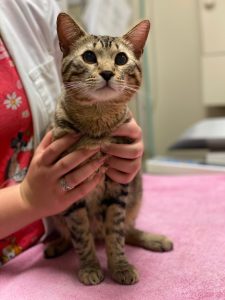 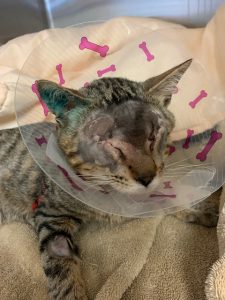 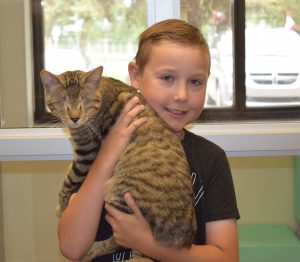