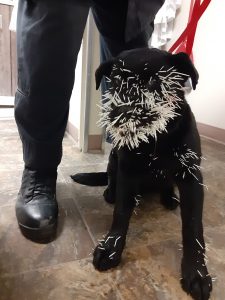 A young pup’s curiosity can be one of its most endearing qualities. But when that curiosity leads to a porcupine, the result can be anything but pleasant. Young Flynn was particularly unlucky when his encounter drew the full brunt of a porcupine’s defenses earlier this month. 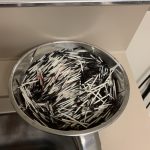 While clearly painful, porcupine quills can have devastating effects on their victim. Due to their pointed structure and backward facing barbs, quills tend to move inward and continue to push deeper into the animal’s body over time. While many animals recover from their injuries, some quills can work their way into the nervous system, nasal cavities and even the heart and lungs causing a myriad of problems – some being fatal. 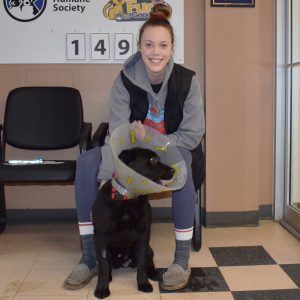 Fortunately, Flynn was found and brought to the Shelter shortly following the attack and Regina Humane Society (RHS) Veterinarians meticulously removed the quills. Despite removing hundreds of quills, his prognosis was positive – in fact looking at him now, you can hardly tell he ever met a porcupine! After being monitored for several weeks, Flynn was ready to start his search for a forever home and lucky for Flynn, his search did not take long as he was adopted just two hours after being made available!

Because of the continued support of our community, the RHS Veterinary Team was there to help Flynn in his time of most desperate need. Flynn has now been happily adopted and is on his way to start his next journey in a loving home. Thank you for giving him a fighting chance.