No one knows how long Bobcat had been alone before being found in an attic. Beside him, his mother’s lifeless body lay. He was starving, dehydrated, his ears were infested with mites, he was missing most of his tail and his eyes were terribly swollen and red. He was dangerously underweight and the effects of the blazing summer heat on his tiny body were taking their toll. At only five weeks of age, time was running out for this little one.

But, that day Bobcat had a hero looking out for him…you. Because of your support of the RHS, our team was ready and sprung into action the moment he came into our care. Our staff cleaned him up, tended to his eyes and ears and encouraged him to eat and drink. Just an hour later, he began to show signs of improvement, as food and water nourished his withered body and caring hands reassured him.

As the days passed, our Veterinary staff became cautiously optimistic that he would pull through, and Bobcat was placed in foster with one of our experienced staff members to keep a watchful eye on our tiny patient. He continued to fight and improve thanks to his care and treatments.  Gradually, his eyes cleared and the pain from the ear mites subsided.  By the time he was 8 weeks old, one would never know how tragically close he was to only knowing pain and suffering, and never the love of a family and home.

We know that if he could talk, he would thank you for supporting the RHS so could receive the care that surely saved his young life.  We would agree.  Thank you for being there for Bobcat when he needed a life-saving friend the most. 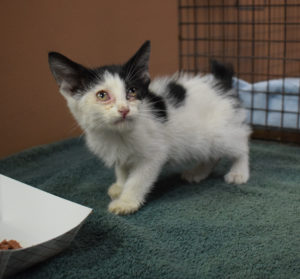 His first meal in some time! 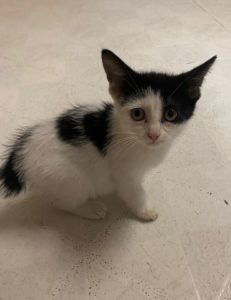 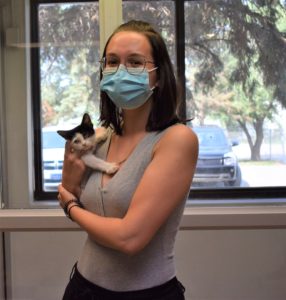