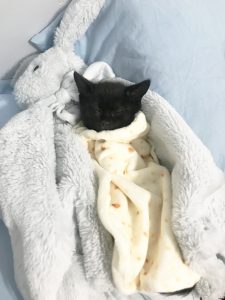 Late one cold November evening, a cat arrived at the RHS in while in labour. Later that night tiny Toothless was born. But, by morning, his mother had rejected him. Suddenly, at only a few minutes old, it seemed that this new and precious life was alone. But he wasn’t.

Sensing that the new mom just wasn’t able to accept her young one, two RHS staff members stepped up to care for the abandoned kitten and act as his surrogate moms, providing bottle feedings and stimulation every two hours. Their efforts paid off, as their young charge began to show signs of response and grew more resilient and thriving under their devoted care. At two-and-a-half-weeks-old, another miracle presented itself…a nursing cat arrived at the Shelter. Shelter caregivers carefully placed Toothless near her and her already growing litter, in hopes that they might accept little Toothless as one of their own. Only moments later there were smiles everywhere as Toothless inched his way closer to the mom and her kittens and eventually right among them where she allowed him to suckle – and enjoy his first much needed “momma meal”! Now a full-fledged member of his new feline foster family, Toothless joined them as they moved into a human foster family’s home where the mom could care for her brood in the quiet and peace as they grew big and strong so they all could find their permanent homes. 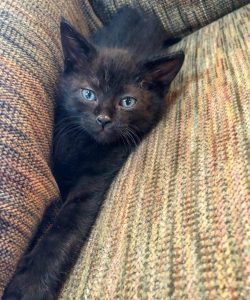 Without so many helping hands, little Toothless may not be where he is today. Fortunately, the RHS is built of a community of caring staff, volunteers and supporters – who together help animals like Toothless flourish and find happy forever homes.

We are very happy to add that Toothless went home for good in early January!