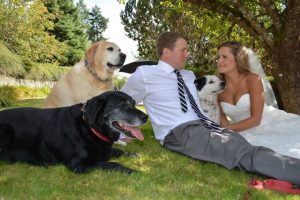 We recently received a letter from a family who adopted a yellow lab named Howard from the RHS over seven years ago. They wanted to let us know how he was doing. It was such a touching message that we wanted to share it with you…

Hi, my name is Deidre Soderberg. My husband Drew and I adopted a giant yellow lab named Howard in September of 2011. Howard was featured on the RHS telethon that year as well. I just wanted to write and say how fortunate we were to come across Howard that day. We weren’t looking for anything specific, but he just stole my heart that day! 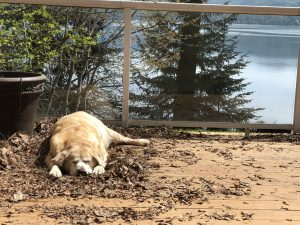 We have since moved back to BC from Regina and we still have Howard! He was 5.5 years old when we got him so that means he is in his 14th year now! He is on multiple meds to help with joint pain and other things but he is so happy and still thriving. He enriched our world so much. He has been an incredibly amazing dog from the get go! He has been the comedian of our fur babies. Never an active lab but boy has he been a very hilariously scheming boy who always had us in stitches and belly laughs in his younger years! He also has been the absolute kindest, snuggliest, thoughtful, sensitive heart of gold boy. 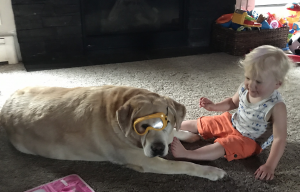 Always loving everyone that comes his way. He has also left quite the imprint on family, friends and lots of strangers! He really should have been a therapy dog. He has been a wonderful little brother for quite some time as well as being the oldest brother now.

We know our time is limited with Howard as he is 14!!! But I just wanted to share that he is still here and he has been so much loved by us and all around us. Watching our family grow always keen and happy to adhere with the changes. He truly is one of the best things we did for ourselves. And we are sure we were the best thing for him too! Such a beautiful gentle soul who we will always fondly cherish. 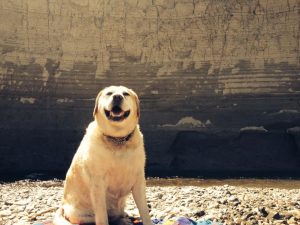 From the bottom of our hearts a sincere thank you to you guys for allowing us to meet Howard that day! He has left his paw print on us forever!